A fellow of the National Institute of Peace and Strategic Studies, Husseina Akila Bangshika (mni), (L) Director of News, FRCN, during the handing-over by the AG DN, Musa Abdullahi, on Tuesday at the FRCN HQ Abuja

Husseina Akila Bangshika has been named Director of News of the Federal Radio Corporation of Nigeria (FRCN), making her the first woman to hold the position since the corporation’s founding in 1956.

Bangshika’s appointment was approved by the FRCN Board of Directors on Tuesday following a successful examination among the department’s most senior deputy directors.

She took over from Sani Suleman, who retired in February after 35 years of service.

Musa Abdullahi, the acting director of news, promised to support the new DN in running the directorate during a brief ceremony on Tuesday.

Bangshika is widely regarded as a thoroughbred journalist, having worked in the industry for decades and rising through the ranks.

Many people expected her to be promoted as the new DN because of her professionalism, while colleagues believe her tenure will bring change and innovation in job ethics and discipline.

Sani Suleiman, the immediate past Director of News, said in a statement that her promotion was appropriate.

He expressed hope that, as the first female to hold the position, she will use her experience to make a difference, in keeping with the FRCN’s motto of “uplifting the people and uniting the nation,” while also fostering peace in the country.

Deputy Director of News, Mrs Folasade Orimolade wrote that “Husseina Akila Bangshika and I have been working together for nearly two decades. She is a professional who is enthusiastic about her work. She’s reliable, thorough, and an excellent writer. I have no doubt that she will use her vast experience to properly steer the affairs of the Directorate.

Mrs Bose Ijelekhai of our human rights desk said, “This is the best thing that has happened to FRCN because it is obvious that the world today is in desperate need of gender-balanced leadership, as well as gender-balanced media coverage”.

She described Bangshika as a leader par excellence who pays attention to every detail and, as such, will bring a unique set of skills, imaginative perspectives, and structural as well as cultural differences that will drive the effective change that the news department has been seeking.

”This is historic and inspiring, particularly for young female journalists such as myself. She may be the first, but she is not the last; everything is changing, including women’s opportunities and status’, Hadiza AbdulRahman said.

Nancy AnikaEzie described her emergence as a wonderful opportunity for a woman to lead the News Directorate for the first time, while hoping she meets expectations so that more doors will be open for women.

Daniel Adejo expressed confidence that her appointment would benefit the industry, saying she would encourage reporters to write good news stories that would cause positive change in society and contribute to the country’s growth and development. 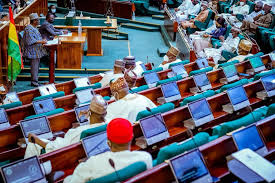 The Catholic Church apologized "unequivocally" on Friday to Canada's indigenous...