Homepage Blog Okonjo-Iweala And Three Things We Can Do For The Nigerian Girl-Child
Blog, News

Today, 01 March 2021, Dr Ngozi Okonjo-Iweala will be sitting in her Centre William Rappard (CWR) office in Geneva, Switzerland. Probably sipping a hot drink as she’s being on boarded. She will have several GTKYs (get to know you’s) lined up over the next weeks and months, for sure. Her immediate focus will be to settle down as quickly as possible to better understand the culture and challenges at the World Trade Organisation (WTO) and the politics of the job as well, which is across borders.

The waning global frenzy that followed her appointment will eventually fade away. The “be like Okonjo-Iweala challenge”, replaced by another exciting challenge, as deemed fit by our social media influencers. 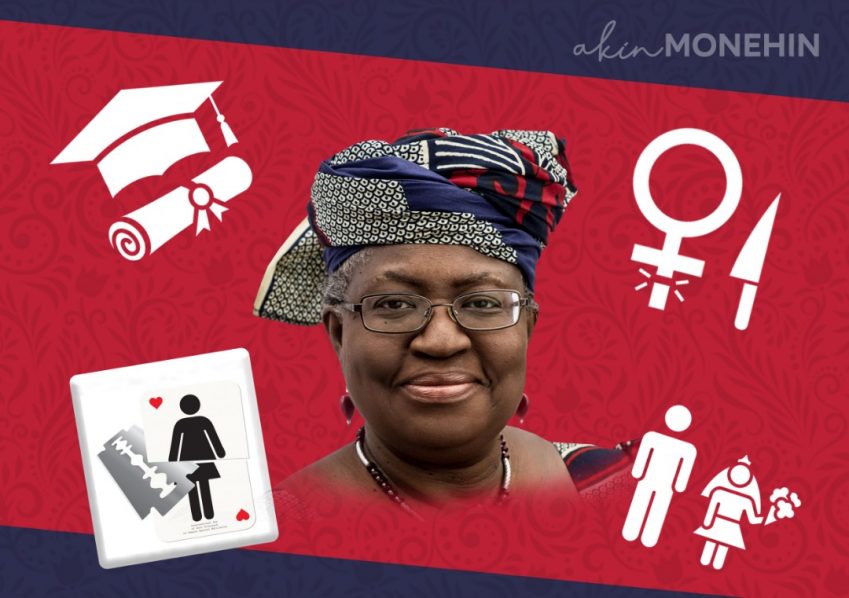 Would she have had such opportunities if she had her higher education and adult life here in Nigeria?

A PwC report, Strength from Abroad, estimates that “likely” over 1.2m Nigerians left the country permanently in 2018 and growing. March 2019 research by respected Pew Research says almost 50% of Nigerian adults plan to permanently relocate to another country within the next five (5) years. Whenever I ask my friends that have migrated out of Nigeria, many say they did because of more “opportunities” it offers their children.

Can the Nigerian girl-child attain her full potential in the prevailing environment?

The State can improve the environment for the girl-child to reach her potential by addressing three (3) fundamental concerns:

1. Getting serious about stopping female genital mutilation
It involves the tradition of removing part of the female genital organs to “curb promiscuity, promote female modesty and chastity”. Some cultures do so to strengthen male dominance.

Sadly, about thirty million (30 m) Nigerian girls have been subjected to this painful practice. No surprise that Nigeria holds the number one position of this extreme discrimination against women globally – according to the National Centre for Biotechnology Information (NCBI).

Even though there is a law protecting the girl-child, however, according to a recent article by Society for the Improvement of Rural People (SIRP), there has not been a single conviction! Let’s get serious.

2. Educating the girl-child
According to the British Council report, Girls’ Education in Nigeria, “Nigeria’s out-of-school population is the largest in the world, and growing.” The gender that forms the majority of that is the female gender. Surprise! Surprise!!
While not discounting the boy-child’s capabilities, an educated girl-child is an asset to the family, organisation and the nation, with amazing multiplier effects. I am convinced this is so, as I have closely observed three (3) amazing ladies – my wife, my mom & my sister – all phenomenal!

3. Moving against early marriage of the girl-child
A UNICEF Report (2018), Child Marriage in West and Central Africa, estimates 22 million child brides live in Nigeria, representing a whopping 40 percent (40%) of all child brides in the West & Central African region. With the dire security situation in many parts of the country, most poor families quickly marry off their daughters, perceived to be of inferior gender, to escape their responsibilities for caring for an additional child.

If Dr Ngozi Okonjo-Iweala were restricted to this environment, she probably would not be the leader of the largest trade organisation in the world … there is a higher chance that she could be a very successful petty trader having branches in Abavo, Ughelli & probably Pesu markets in Delta state.

About the Author:
Akin Monehin, a thought leader, speaker, and business strategist is the Business Ignite Columnist at www.guardian.ng He hosts the thought leadership conversations on YouTube, “Make or Mar Moments.” and “After 5 at 5”.

Press Statement on the Abduction of Special Education Teacher in Abuja

The insecurity issues currently faced in the country is a...